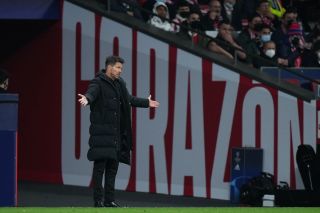 Diego Simeone is not one for shaking hands after a match.

Call it unprofessional or bad sportsmanship all you like, but the Atletico Madrid manager doesn’t care as he made very clear after refusing to shake Jurgen Klopp’s hand earlier this season.

It was the same old story on Wednesday night at the Wanda Mentropolitano, when Simeone walked straight down the full after the full-time whistle, refusing to acknowledge Ralf Rangnick after a 1-1 draw. The Argentine coach looked like he was competing with Cristiano Ronaldo to see who could get back to the dressing room first.

To Simeone’s credit, it’s nothing personal. He’s simply not a fan of the ritual.

“I don’t always greet (the other manager) after the game because I don’t like it,” Simeone said in October, as per the Metro.

“It’s not healthy for either the winner or the loser. I think of it that way.”

There’s no sense making a big deal over this because Simeone has already made his position clear. And, I hope reporters don’t waste his time with questions about handshakes when these two teams meet again.

I bet he’s that one friend who never replies in the group chat.