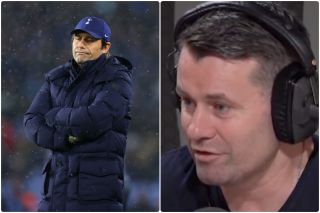 Following a terrific win over Premier League leaders Man City on Sunday, Antonio Conte’s Tottenham Hotspur side were brought back down to earth when Burnley beat them last night.

It was their fourth defeat in five league games, a run which had led to Conte questioning his position as manager, despite only arriving in North London in November.

Every Manchester United fan will be hoping the drama continues at Spurs because it will only damage their chances of finishing in the top four.

Conte’s explosive post-match interview gave the impression that his days at Spurs could be numbered.

The Italian said, as per The Sun: “Maybe I’m not so good. Yes, I’m not so good. I think Tottenham called me to improve the situation. But, I’m too honest to close my eyes and to continue to say ‘okay, but I want to finish this season but my salary is good’ – not, I am not this type of person.

“I have ambition. I hate to lose. We lost, I repeat, four games in the last five games. I won’t accept this. I want to try to move the situation, also to make assessment with the club.”

Conte already sounds defeated and part of me is thankful of the fact he wasn’t the man to replace Ole Gunnar Solskjaer. The trouble he brings isn’t worth it.

Speaking to talkSPORT, former Premier League goalkeeper Shay Given said he would not be surprised if United have been in contact with Conte about taking over at Old Trafford this summer.

Given said: “My concern is has he got something else lined up? For a manager who is supposedly on £15 million per year and has a massive contract, he looks like he wants to walk away from it to be honest.

“When you come out with comments like that last night it looks like he is edging to get away from the place. You talk about Manchester United, I think there is a perfect fix there.

👀 “My concern is he has something else lined up. He looks like he wants to walk!”

🔴 “It feels like #MUFC need someone strong to sort that dressing room out!”@No1ShayGiven believes there could be a chance Conte leaves #THFC for Man Utd. pic.twitter.com/2Rs6iZVXXw

“Maybe someone from the red side of Manchester has been in contact with him. It feels like they need a character like him that’s really strong to sort that dressing room out.”

Personally, I think United will be turned off by Conte’s behaviour in the media. There is no way they would appoint another antichrist like Jose Mourinho.

But we can’t ignore the fact United will be in the market for a new manager this summer and Conte was heavily linked with the job prior to Ole Gunnar Solskjaer’s sacking. It was later suggested that the board were unconvinced that he was a good fit for the club.