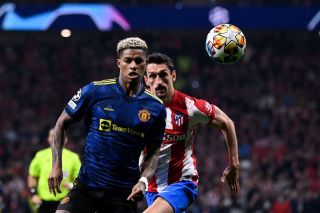 Everyone is asking what has gone wrong with Marcus Rashford.

We previously discussed the Manchester United forward’s form on the Strettycast, but our number 10 has continued to struggle on the pitch. It is frustrating because Rashford is one of our better players and we know the level of damage he can cause other teams when at his best.

Rio Ferdinand and Michael Owen have given Rashford some simple advice to help improve his game, after another disappointing display for United in the Champions League. He was substituted in the second half for Anthony Elanga, who scored the important equaliser with 10 minutes left on the clock.

Owen told BT Sport: “There are things that you don’t even have to be good at to get a round of applause. To put in the hard yards. They make you feel better about yourself, and your confidence starts coming back.

“I think he needs to go back to the start. Even if you don’t play magic, you can still influence the game, easily.”

What's gone wrong with Marcus Rashford? 🤔@themichaelowen & @rioferdy5 offer their advice on how Man United's no. 10 can find his way back to form.#UCLTonight pic.twitter.com/C2QQiYMuDz

Fellow BT Sport pundit Rio Ferdinand was in agreement with Owen. He also wants to see more effort from Rashford on the pitch, saying: “I’ve not been around Marcus a lot. But I’d like to think that he’s sitting and watching these performances. Watching elements of his game.

“You need people around you… The tactical thing is different. They’re things that can be ironed out. But it’s like Michael was saying, it’s the intensity. Make it hard for your opponent.

“Go out there and if you’re playing left wing, the right-back needs to come off sweating. Whether I produce a magic moment or not, he’s going to know he’ll have to work really hard to stay in this game and stay with me.

“Marcus physically is an absolute animal. Stripping it back to the basics. Do them really, really well.

“It ain’t just Marcus by the way. There’s a lot of players who need to look at certain aspects of their game to improve.”

Rashford failed to have any real impact on the game and, with Elanga playing well whenever given the opportunity, we could see the young Swede start more games in the coming weeks.

The 19-year-old has scored off the bench for United in our last two games and he should be in contention to start against Watford.