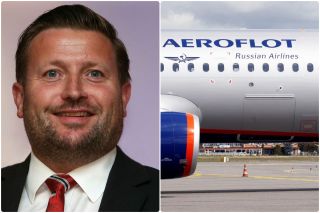 Manchester United could end their sponsorship agreement with Russian airline Aeroflot as a result of the growing crisis in Ukraine, according to reports.

Of course, it would make sense for United to distance themselves from the firm after Russia decided to invade its neighbouring country during the early hours of the morning.

Russian president Vladimir Putin announced a ‘special military operation’ at dawn, as per The Wall Street Journal, which had led to warnings from every corner of the globe that we could see the biggest war in Europe since 1945.

Russia have started to drop explosives on Ukraine, with distressing footage and news reports emerging on social media throughout the morning.

CNN’s Matthew Chance in Kyiv, Ukraine, stops his live reporting to put on gear as he and the team hear loud explosions near the city. https://t.co/y7MglyEtcd pic.twitter.com/YShfN9OBQf

Update: Aeroflot has been banned from the UKBoris Johnson has confirmed that United sponsor .

Aeroflot have been one of United’s major sponsors since 2013 but an extension was agreed in 2017 in a deal worth around £40 million. The current deal expires in April – but, according to the Mirror, United CEO Richard Arnold has no intention of renewing it.

United flew to Madrid using alternative airline Titan instead of Aeroflot, so it looks like the club will be seeking a new airline partner once they officially end their nine-year association with the Russian company.

Qatar Airways could be another option for the club.

Does anyone know Chelsea’s stance on Russia’s invasion of Ukraine?