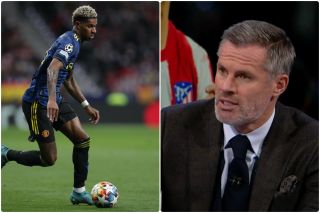 The Manchester United forward is going through a very difficult spell at the moment and he produced one of his worst performances of the season against Atletico Madrid on Wednesday night.

Rashford was eventually replaced by Anthony Elanga, who scored the equaliser for United with 10 minutes left on the clock, and it sounds like there could be calls to drop the England international in the coming weeks.

However, in Rio Ferdinand’s post-match assessment, the former United defender pointed out how Rashford is not the only player who needs to take a look at his game.

Elanga’s goal means United are firmly in the tie despite trailing 1-0 at half-time. Ralf Rangnick was disappointed with the first-half display, but Carragher focused on Rashford’s display.

He told CBS (via Metro): “Marcus Rashford has been in this team since he was a kid. He burst onto the scene and he’s always threatened to go to that next level, when the top players get to, and he’s not there yet.

“We’ve got to the stage now where I don’t think he should be in Manchester United’s XI. His performances this season don’t warrant being in the team.

“More often than not he is in the team. Even when people are fit they find a position for him. He doesn’t suit playing on the right, not at all, so it needs to be on the left or in the centre.

“But we’re still waiting for Rashford to make that jump to become a United great or a player who can take them to big trophies, and he’s not there yet.

“At the age he’s at, United need something better than Marcus Rashford right now.”

It feels harsh to pin our shoddy displays on Rashford, but he has not helped matters this season. Hopefully he can find his best form before the season ends.