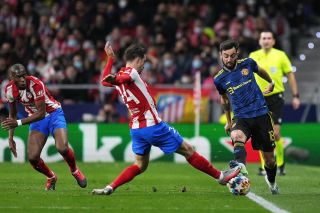 Bruno Fernandes didn’t have one of his better performances last night against Atletico Madrid, but that did not stop him playing a crucial role in Manchester United’s all-important equaliser.

We have long learned that Fernandes is a player who takes risks on the football pitch and some weeks it doesn’t come off for him, especially at times this season.

However, he is a star in Portugal not only because he’s an established international, but Fernandes impressed during his time at Sporting Lisbon before signing for United in January 2020.

What will come as news to many, however, is that Fernandes struggled during his time in Italy.

After leaving Portugal in 2012, he had spells at Novara, Udinese and Sampdoria.

Former Juventus midfielder Claudio Marchisio was asked about Fernandes’ time in Italy while covering the Champions League for Amazon Prime.

“It would have been nice to see him in a big Italian club. In Udine he was blocked by Di Natale, then he did well in Genoa but nobody had faith in his talent, which exploded in England,” Marchisio said (via Sampdoria News – H/t Sport Witness).

Fernandes has been one of United’s most influential players since joining the club.

The Portugal international created a wonderful assist for Anthony Elanga to score against Atletico Madrid at the Wanda Metropolitano.

It’s time to sit Fernandes down and sort out his contract before the current deal expires.