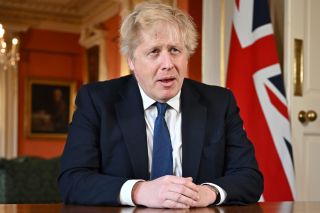 British Prime Minister Boris Johnson has confirmed that the UK is set to impose bans on Russia’s Aeroflot, sanction banks, businesses and oligarchs.

The UK will immediately suspend or prohibit all dual use export licenses to Russia, as per The Economic Times, but this also backs up claims that Manchester United CEO Richard Arnold has decided not to renew the club’s deal with Russian airline Aeroflot.

Earlier today, we covered reports that suggested United’s dealings with Aeroflot were about to come to an end, with the club trying to distance themselves from the firm following Russia’s invasion of Ukraine.

Explosives were heard in Ukraine during the early hours of the morning and the situation is believed to have worsened, with Russia invading from all sides.

Boris Johnson has now decided to ban Aeroflot from Britain as part of the Russia sanctions, as per Rob Harris of AP News agency.

Aeroflot, which sponsors Man United and provides planes to the club, is banned from Britain by Boris Johnson as part of Russia sanctions

It looks like United will be in the market for a new airline sponsor, as well as a new manager and players this summer, adding to already long list of jobs for Arnold.

Ed Woodward will be avoiding the heat for once.