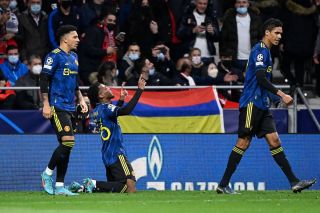 In doing that, Elanga became the club’s youngest scorer in the knockout stages of the Champions League, which is another marvellous feat for a player trying to break into the first team.

There is a conversation to be had over whether Elanga is more deserving of game time than Marcus Rashford right now, with one Sky Sports pundit suggesting that the England international no longer warrants a place in the United line-up after a long run of poor performances.

Elanga replaced Rashford in the second half last night and scored the all-important equaliser with his first touch of the ball to make it 1-1 at the Wanda Metropoliano.

OptaJoe tweeted the following statistic after the goal: “500 – Anthony Elanga’s goal was @ManUtd’s 500th in the European Cup/UEFA Champions League, a tally bettered by only Real Madrid (1001), Bayern Munich (760) and Barcelona (624). Giants.”

Although he was United’s star from the bench on Wednesday night, Michael Owen wasn’t all that impressed – and harshly compared the young Swede to legends like Wayne Rooney and Ryan Giggs.