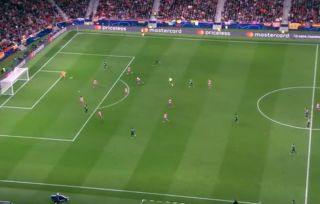 Anthony Elanga scored United’s 500th goal in the European Cup to help the Reds earn a 1-1 draw at the Wanda Metropolicano.

The 19-year-old made his first appearance in the knockout phase of the Champions League and it was a night to remember for the Swede.

Elanga made an instant impact after coming on as a substitute in the 75th minute to replace Marcus Rashford, who was pretty disappointing on the night.

All the talk after the goal was about Bruno Fernandes’ incredible through ball but this bird’s-eye view angle shows you the full transition from defence to attack.

It looks like the lads were enjoying a game of headers & volleys — in their own half!

Fernandes didn’t have one of his better games but still proved to be a key performer with his assist.

We will be hoping for an improved performance in the second leg.