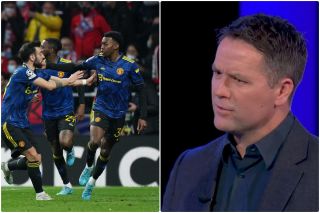 Michael Owen is not buying into the hype surrounding Anthony Elanga.

Even after coming off the bench to score in Manchester United’s last two matches, the young Swede still has a lot to do in order to convince Owen he can become a top player, like Ryan Giggs and Wayne Rooney did many years ago.

Speaking after the match on BT Sport, Owen said (via The Sun): “He’s made a difference when he’s come on.

“If I saw him playing for any other team I’d say, ‘yeah, this kid’s got something and he’s going to be a good player.’

“Is Elanga and players like that going to take you to the league title or win the Champions League? Are they like Ryan Giggs or Wayne Rooney coming through?

“He’s a very, very good player, but if I’m being brutally honest, if you’re asking me what I think of him, I think he’ll have a fantastic career, but he’ll do very, very well to be a Ryan Giggs or a Wayne Rooney.

“I know that’s comparing [Elanga to club legends], but that’s what Manchester United are. That’s what they’re aspiring to be, they were and they’ve got to get back to that.

“If you’ve not got that absolute freakish talent, you’re not really going to be the right… we’ve just spoken about Marcus Rashford – he’s a phenomenal player – he’s got to find another level. Because at the minute they’re not playing like they’re going to win the Champions League or the league.”

Elanga only became a first team regular after Ralf Rangnick arrived as interim manager and sources close to the club have told Stretty News that he is keeping his head down and working hard, amid the hype that was obviously going to come with his impressive performances.

It seems extremely harsh that Owen has prematurely compared the youngster to club legends like Rooney and Giggs. You would expect a former professional to know better.

Moreover, Ralf Rangnick has been waxing lyrical about the youngster and it was clear to see from the 19-year-old’s post-match interview that he has the utmost respect for the manager.

The point I am trying to make is, Elanga has one person he needs to impress right now, and it isn’t some BT Sport pundit who has close connections to Liverpool FC.

With many United players underperforming this season, I find it baffling that Elanga is the player Owen wanted to make an example of, by comparing him to some of the best players we seen in the previous generation.

Elanga has a lot of time to develop into an even better player and it’s crazy to compare him to Rooney and Giggs this early in his career.