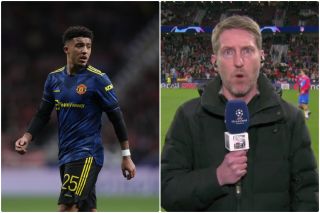 Jadon Sancho has arguably been Manchester United’s best player since the turn of the year.

The England international now looks like the man that was purchased from Borussia Dortmund.

Cool in control and exhibiting flair with ease, it is clear that Sancho’s confidence is growing at United, so it is nice to hear United We Stand editor Andy Mitten explain his recent improvement.

Before we get to what Mitten said, let’s take a look at Sancho’s goal contribution stats to simply show how Sancho has improved in a United shirt.

United fans have been patient with the £73 million summer signing (via BBC Sport), who failed to register a single goal or assist under Solskjaer, but he now has four goals and two assists to his name for the season.

Speaking to Sony Sports Network, Mitten, who is a regular panelist on Talk of the Devils podcast, explained the rise of Sancho.

The fanzine editor alludes to the big expectations that came when Sancho joined United in the summer before “doing almost nothing in the first-half of the season.”

Mitten said: “He wasn’t strongly criticised because, I think, fans are patient and can see that he’s a young guy.”

Perhaps the most interesting part of Mitten’s segment was how he revealed Sancho kept injuries as a secret at the beginning of the season, which again only helps explain why he didn’t hit the ground running at Old Trafford.

“His confidence is up,” Mitten added. “He did have some injuries which he kept quiet at the start of the season and I’m told he feels he’s got the absolute confidence of the manager and that breathes more confidence.”

Hopefully Sancho can continue this level of form and finish the season strongly as United fight for that top four finish.