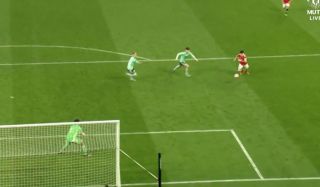 Manchester United are through to the FA Youth Cup semi-finals after beating Leicester City 2-1 at Old Trafford tonight.

Travis Binnion’s side have already eliminated Scunthrope, Reading and Everton in the FA Youth Cup this season, with Leicester City the latest club to be added to that list.

United forced a comeback from 1-0 down thanks to Alejandro Garnacho, who scored a terrific brace on the night, with his first goal coming from a superb free-kick before the interval.

The U18s star scored the winner with less than a minute of normal time left on the clock. As seen in the video below, Kobbie Mainoo plays a brilliant pass into the box before Garnacho scored the all-important winner.

Bring on the semi-finals!

The lads involved tonight will gain lots of experience from winning an important match at Old Trafford.

They all see it as an honour to play at the Theatre of Dreams and it’s a dream to see another young side do well in the FA Youth Cup, which United last won in 2011 when Paul Pogba and Jesse Lingard were part of the squad.

Fingers crossed Binnon’s side can go all the way this season.