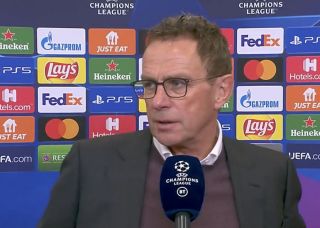 Manchester United interim manager Ralf Rangnick was far from happy with his side’s performance, particularly in the first half, against Atletico Madrid during Wednesday’s Champions League knockout first-leg tie.

The Red Devils started Wednesday’s important European clash on the back foot and conceded an early goal after just seven minutes, thanks to a brilliant header from Joao Felix.

Clearly not at the races, the Red Devils failed to register a single shot on target throughout the game’s first 45-minutes.

Although young winger Anthony Elanga was able to drag the Red Devils level late on in the second half, Rangnick has been quick to condemn his side’s performance.

“Against and with the ball we were far too apprehensive and did not take any risks. We only played it in our own half and then it is difficult against a team like Atletico. Their goal was difficult to defend, a brilliant cross and finish. We have to play with more conviction on the ball, we need more deep runs and the way we scored the goal was exactly that. This is how we have to play against them.”

“After the performance in the first half it could only get better.”

“I wish a few other players would take Elanga as an example.”