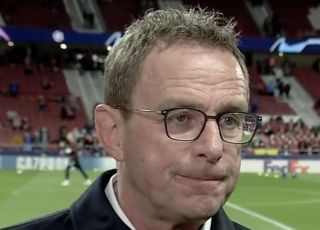 However, despite seeing all the usual suspects set to start, the German interim boss left fans rather puzzled after naming a back four consisting of Luke Shaw, Harry Maguire, Raphael Varane and Victor Lindelof.

Although natural right-backs Diogo Dalot and Aaron Wan-Bissaka are available on the bench, Rangnick has surprisingly opted to field Lindelof ahead of both.

Discussing his team selection, as well as his unusual formation, Rangnick has hinted that changes may occur during the game.

“Yes, we decided to choose a lineup and a formation that we could always react to no matter what Atleitcco will do,” Rangnick told MUTV before the game. “We could also play with different formations.

“Even change during the game and still have enough physicality and also physical size for set pieces no matter of it is for us or for them.”