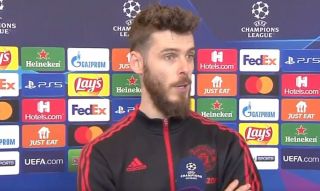 The Spaniard returned to the city of his birth and he was not given the warmest reception from the home support. It’s clear they still feel betrayed by his departure from Atletico in 2011.

De Gea left his boyhood club for a dream – something nobody can blame him for – though Atleti ultras may argue they’ve seen better success over the past decade than United.

They wouldn’t be wrong but tonight we battled with the La Liga champions. They scored 7 minutes in but we equalised at the end, thanks to Anthony Elanga.

De Gea spoke to beIN Sports after the match and credited the player’s character shown in the second half. He also praised Elanga after his crucial goal.

🗣️ "The second half showed we have a good character. He [Anthony Elanga] is playing very well, it's a big performance from the bench… Massive for him and massive for the team."@D_DeGea's full-time thoughts following @ManUtd's 1-1 draw.

It’s good to see De Gea do more interviews because he is one of the senior players at the club, but we can’t ignore the fact United were abysmal in the first-half and lacked conviction, which Ralf Rangnick admitted in his post-match interview.

The Spaniard is also likely to sign a new contract at the club.