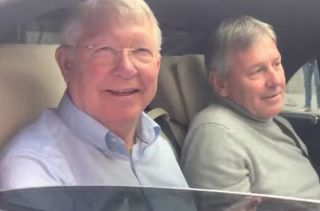 The Reds take on Atletico Madrid in the Champions League round-of-16, with both teams experiencing difficult seasons and still searching for consistency. That is why Atletico Madrid won’t retain their La Liga crown and it is also why United are not competing with Man City and Liverpool for the Premier League title.

Long gone are the days of Ferguson.

But hopefully Fergie’s presence in Madrid can help on the night as United look to put one foot in the Champions League quarter-finals.

He was spotted in Madrid with former United captain Bryan Robson when it looked like the pair were en route to the stadium.

A fan recorded his brief exchange with Ferguson from a car window before asking him for a match prediction.

Ferguson said, with a cheeky smile on his face: “I’d settle for five.”

It would be fantastic if United could come away from the Wanda Metropolitano with such a win, but I reckon it will be a tough contest tonight — with form going out the window.

In fact, I would be happy to take a draw back to Old Trafford.