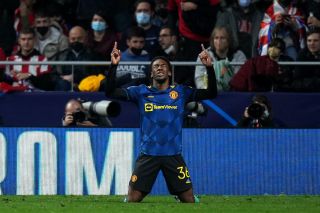 Manchester United will be delighted to go back to Old Trafford at 1-1 as Ralf Rangnick’s side recovered from a poor start in the Spanish capital.

Joao Felix put Diego Simeone’s infamously streetwise La Liga champions ahead, but to their credit United hung in, showed character and will go into the second leg level thanks to substitute Anthony Elanga.

Here is how we rated each Red on our first visit to the Wanda Metropolitano:

Had little to do against his former employers and cannot be blamed for the goal. Nothing he could’ve done about Felix’s excellent thumping header.

Inexplicably picked to start at right-back and got torn a new one against the impressive Lodi. Atletico were at their most menacing down his side and it was no surprise to see him hooked when on a yellow

Looked strangely nervous and ill at ease for a man of his experience and a four time winner of this competition. Improved in the second half but you expect better from a player of his quality.

Did little wrong bar his sloppiness in possession but he certainly wasn’t alone there. Nothing he could’ve done for Atleti’s opener and improved after half-time

Got little joy and struggled to make an impact. Picked up a booking and it’s a surprise he remains first choice. Hooked in the second half

Swamped and over-run by Atletico’s impressive string pulling duo of Herrera and Geoffrey Kondogbia. Spent the whole game fighting a losing battle, he got booked and we very much missed the absent Scott McTominay.

The Frenchman has been impressive on his return from injury but was upstaged by his friend and compatriot Kondogbia who seemed attracted to the ball like a magnet. No surprise to see him taken off

Tried to make things happen and never stopped working but he became wound up and lost his focus. That said, his passing did improve and he continued his run of goal contributions when he teed up Elanga.

Virtually anonymous on the right. Selfish and sloppy in possession, he was subbed after 75 soporific minutes. It was a surprise he lasted that long.

This was not a night for the creative flair player and it showed. Busy and there were glimpses but dipped below his level of late. Showed urgency but faded to the fringes.

Another to be almost anonymous but in fairness he was starved of service and marshalled superbly well by Atleti’s two tough-as-teak centre-backs. He’s plundered two hat-tricks against Simeone’s side in his Real days but got nothing here.

Brought more balance down the right and was involved in the goal when he won the ball. It was a surprise he didn’t get the nod from the start.

Did well when he came on. United’s passing was better and we controlled the game a lot more when the veteran Serb came on. He’s an excellent option in games like this where you need to tidy things up a bit.

Manchester United’s new star boy stepped off the bench again with another stunning strike. What a talent. Rhythm is a dancer, Anthony Elanga..

Offered little in his eight or so minutes on the pitch

Gambled with our European future by starting Lindelof in an alien position but to his credit the subs worked and he will be delighted with the result.