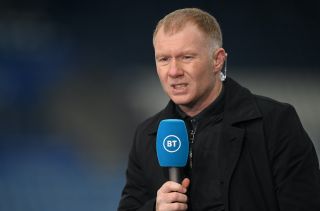 It was a good result for Manchester United. I would’ve taken a 1-1 draw before the game.

Paul Scholes had his analytical specs on in the BT Sport studio, though, and he couldn’t get too excited about United’s performance which was lacklustre at best.

United played without conviction for the first 70 minutes before we edged out a 1-1 draw away to Atletico Madrid in the Champions League.

“It’s a typical performance of Man United these days. They’ve been very lucky to get through games. You have to say, their record is very good.

“I think their substitutes tonight, and on Sunday made a difference. But to me, I don’t think that was a strange performance, it was a typical one for me.”

Former Manchester United defender Rio Ferdinand added: “I would have took that result before the game, but they were lucky tonight.

“I thought they were poor in the way they played in the first-half… in terms of chances against, there wasn’t many. But you’re looking for a better performance. A bit more intense.

“Even the players cohesiveness, and togetherness wasn’t there today. So, there’s a lot of stuff that you’d moan about, but it’s one they’ve got a result.”