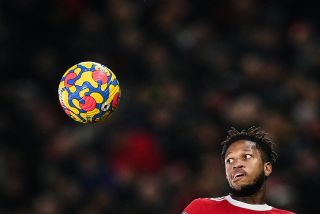 Manchester United midfielder Fred has expressed concerns about the club’s long-term planning, and he makes a very good point.

The Brazil international admits “it is a bit strange” to be under an interim manager for the remainder of the season as it leaves the players out of the loop a bit, not knowing that the future holds, but we believe that United are activity working to recruit a new manager.

“It is a bit strange,” Fred told TNT Sports Brazil, as cited by The Athletic (£). “I know in football it’s important to get good results as soon as possible, but it’s also important to have a long-term plan.

“I think it’s a little bit bad for us not to have one, at the moment it’s all about the short-term goals. We don’t know how it’s going to be after the end of this season.”

Fred’s comments come as United face up to the prospect of another season without a trophy.

The Reds are currently in Spain preparing to take on Atletico Madrid in their Champions League last-16 first leg. It is the first time since 2019 that we’ve reached this stage of Europe’s most prestigious competition.

Having sacked Ole Gunnar Solskjaer in November, the club decided the go down the interim route because their main targets already held jobs and getting them to Old Trafford midseason was tricky.

Ralf Rangnick was the man and he is set to move upstairs into a consultancy role when the season ends. He is presumably part of the team conducting United’s managerial search along with John Murtough, Darren Fletcher and Richard Arnold.

There is bound to be uncertainty at United until we announce a new manager, with Erik ten Hag and Mauricio Pochettino being the most popular choices.