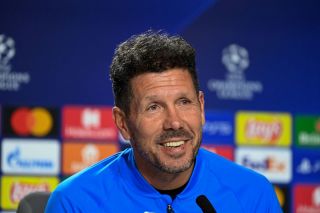 Diego Simeone believes Manchester United are one of the best teams in the world right now.

Atletico Madrid welcome Manchester United to the Wanda Metropolitano tonight in a Champions League last 16 clash that is extremely difficult to call as neither side are showing good form at the moment.

The Spanish giants, despite being crowned La Liga champions last season, have offered a terrible defence to their crown – sitting fifth in the league table and level on points with fourth-placed Barcelona. Meanwhile, Real Madrid have 15 points more than their rivals as they sit on top of La Liga.

United are not doing any better – sitting fourth in the Premier League – and trail league leaders Man City by 17 points.

Diego Simeone recently celebrated 10-years in charge of Atletico but some have suggested that his time may be coming to an end, including Football Espana editor Alan Feehely, who joined us on the podcast this week.

The Argentine coach held his pre-match press conference on Tuesday and maintained that Atleti are facing one of the best teams in the world.

“We’re facing one of the best teams in the world in the last 14 games, if I’m not mistaken,” Simeone said, as per Sky Sports. “They’ve just lost one. With the new manager, Ralf Rangnick, it’s given the team solidity, teamwork, commitment.

“We can see what Manchester United was always like. They’ve evolved since the new manager arrived, they’re already fourth in the league.

“It’s an intense, dynamic team, very brave, with very good forwards, very good footballers overall and who try to make a huge effort to try and unite the huge talents they have in 11 players.

“It’s going to be a very difficult game, as every Champions League game is. But we have a lot of anticipation to play in our stadium ibn front of our fans and we’re lucky to play the last 16 at home because we couldn’t play that, we couldn’t do that last year.”

Atletico were dealt bad news yesterday, with captain Koke ruled out for the first leg, so that should help United in what is bound to be a midfield battle between the two sides.

“The team is much more compact, it’s stronger,” Simeone added. “They have a solidity at the back, they’re a very physical team with the central defenders and the midfield they’ve got.

“They are really strong and it’s really, really difficult to find vulnerabilities there.

“I always assess the virtues of our rival, but of course we will try to find a way to try and hurt them, try and find our way to the goal, if you like.”