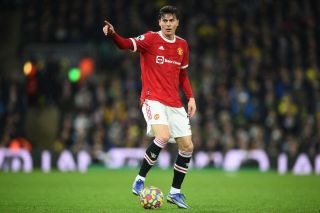 Manchester United are in Madrid for the first leg of an intriguing Champions League last-16 tie tonight.

Cristiano Ronaldo will be hoping it’s another night to remember against Atletico Madrid.

The Manchester United star, who has scored nine goals in 22 Premier League games since returning to the club in the summer, already has six goals in five Champions League matches this term.

Tonight, he starts – leading the line for United – against an opponent he shares quite a bit of history with. Ronaldo has beaten them in two Champions League finals with Real Madrid, in Lisbon in 2014 and Milan in 2016.

It looks like it could be a 4-2-3-1 formation tonight with Victor Lindelof at right-back, as suggested by Laurie Whitwell.

Here’s how we’ll line up in Madrid… 🇪🇸#MUFC

I don’t recall Lindelof playing at right-back on many occasions but there must be a reason behind Ralf Rangnick’s surprise decision.

Neither side is playing at the level we’d have been accustomed to a number of years ago, so we could see form go out the window for this clash.

Kick-off is at 8pm and the game will be broadcast live on BT Sport 2 and BT Sport Ultimate, with coverage already underway since 7pm.