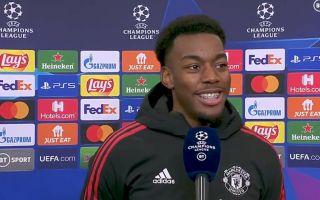 It was a night to remember for Anthony Elanga but he is still hoping for a better outcome from the second leg.

Manchester United left it late but managed to come away from the Wanda Metropolitano with a 1-1 draw.

Atletico Madrid opened the scoring just 7 minutes in with a Joao Felix header.

The Reds were second best in every department for the first 70 minutes until Ralf Rangnick’s substitutions changed the game.

Having brought Elanga on for Marcus Rashford, Atletico Madrid were dealing with a talent they did not know much about and that showed when he was given space to break free on goal.

A terrific Bruno Fernandes through ball put Elanga in a position to score as he slid the ball past Jan Oblak to make it 1-1.

Elanga described it as a dream come true in his post-match interview with BT Sport.

"I think that was my first touch as well!"

"Every time the boss puts me on, I just want to repay him!"

If the young Swede keeps repaying the manager’s faith it won’t be long before he gets more starts under his belt, especially if Rashford continues to struggle.

“Every time the boss puts me on, I just want to repay him,” Elanga said.