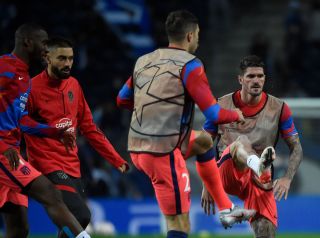 Atletico Madrid are looking forward to facing Manchester United in the Champions League, according to star midfielder Rodrigo de Paul, who joined the La Liga giants from Udinese in the summer.

The Argentine has proven himself as one of the best midfielders in La Liga this season, although he has been unable to really help Atletico Madrid through their struggles, on the back of winning the title last season.

Atletico are currently fifth in La Liga – level on points with fourth-placed Barcelona – and they are 15 points adrift of league leaders Real Madrid. However, Diego Simeone’s side go into Wednesday night’s game on the back of a 3-0 win over Osasuna at the weekend.

Speaking to Mundo Deportivo, De Paul gave some insight into how Atletico are feeling ahead of kick-off, saying: “As I see and understand football, I think there’s no need to be on a good run of form before a game of the importance of this Wednesday.

“Playing in the Champions League with this shirt, with the way the Wanda Metropolitano is going to be, with that rival and the history they have… These are all ingredients that are going to make the team super motivated and eager.

“This team, on the inside, never has doubts regarding what we can do. You see how we work. It’s just a matter of getting the results back on track. You have to remember that this team, until May, will continue to be the champions of Spain. That’s enough of a reason for us to be respected.”

We can expect a tense affair on Wednesday night but we’re always looking forward to it, especially after experiencing far too much Europa League football in recent seasons. This is the level United should be at every season without fail. Nothing less with more expected.