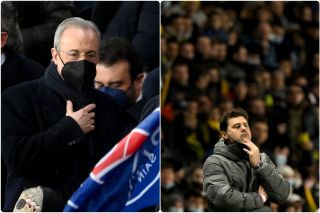 It sounds like Florentino Perez got a glimpse of something he wants at Real Madrid when Los Blancos lost 1-0 at the Parc des Princes last week.

Mauricio Pochettino’s Paris Saint-Germain were far superior to Real Madrid and were unlucky not to have won the Champions League tie by a greater margin. The Spanish giants got to see first hand the damage Kylian Mbappe can do to defenders, with the young Frenchman led by an astute tactician.

This will only raise questions about whether Real Madrid can lure both Pochettino and Mbappe to the Bernabeu this summer?

According to the Daily Mail, Real Madrid are poised to join Manchester United in their pursuit of Pochettino, who is expected to leave PSG at the end of the season.

PSG are on course to win Ligue 1 which would go some way to silence a lot of the criticism that surrounds the former Tottenham and Southampton manager, who has only won the French cup to date.

United’s new chief executive Richard Arnold is believed to have started the process to install a new permanent manager, with football director John Murtough working alongside Darren Fletcher on the finalised shortlist of candidates.

However, Pochettino has been linked with a move to Old Trafford for years, so he’s bound to be among the favourites along with Ajax coach Erik ten Hag.

Other names in the mix include Luis Enrique (Spain, former Barcelona) and Julen Lopetegui (Sevilla).

Let us know in the comment section if you think Pochettino would pick United over Real Madrid?