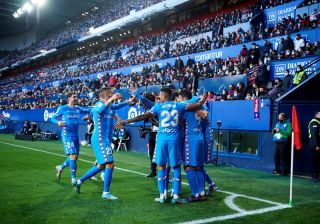 Manchester United will be looking to put one foot in the Champions League quarter-finals when they take on Atletico Madrid in the first leg of the last 16 knockout stages on Wednesday night.

The Reds go into the game on the back of a 4-2 victory over Leeds United in the Premier League at Elland Road whilst the hosts ran out 3-0 winners over Osasuna in La Liga last weekend.

Cristiano Ronaldo is widely expected to lead the reds attack against Atletico whilst Jadon Sancho is also expected to feature having impressed in each of the Reds last few fixtures.

Trailing Manchester City by a whopping 17 points and out of both domestic cup competitions, the European Cup remains the only trophy available to win for Manchester United this season. It may be a long shot but winning the European Cup isn’t out of the question for the Reds this season, especially with Cristiano Ronaldo on board and in facing Atletico Madrid it provides the Reds a great opportunity to progress to the quarter-finals.

Atletico Madrid currently sit 5th in the La Liga table and have endured a mixed season thus far under Diego Simone. Having won La Liga last year, the Spanish side look a shadow of their former selves this time round and make no mistake this is a tie which United will fancy their chances of going through in.

The draw in many respects has been kind for United and although Atletico Madrid are no pushovers, you would still fancy United to go through. Luis Suarez, Griezmann and the likes can still cause United a lot of problems but defensively they are not quite so strong and with Ronaldo in particular in fine form in Europe this season few would back against him scoring again here.

It will be close but I do fancy United to get a win here and if they do it will put the Reds in a great position to qualify to the quarter finals.