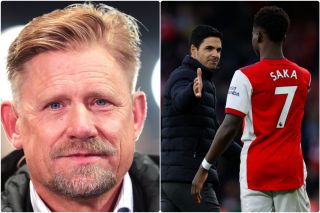 United’s win over Leeds on Sunday meant that we stayed in fourth place, moving four ponts clear of fifth-placed West Ham and sixth-placed Arsenal, but the Gunners have three games in hand.

Schmeichel reckons Arsenal are the only team who can realistically beat United to that last Champions League spot. When asked who he was backing to clinch fourth, the Dane told BBC Radio Five Live (qoutes via Manchester Evening News): “I think Arsenal have shown some great form.

“But actually, on current form in the last five games, Man United is a little bit better than Arsenal. It’s hard to see but they are.

“I think having the points on the board rather than games in hand [is more important].”

None of the teams fighting for fourth place are in a position where they can get carried away with their results of late, and I suspect Tottenham will fall out of the race soon despite beating Man City 3-2 on Saturday.

Arsenal beat Brentford 2-1 at the Emirates Stadium and they will be looking to take advantage of their games in hand.

Mikael Arteta will be keen to keep focus on maintaining momentum, which is something Ralf Rangnick must try to achieve with his team in the coming weeks, but they face Wolves on Thursday night.

There have been reports in recent weeks that there is unrest in the United dressing room and Schmeichel insists the win over Leeds was more important than ever, adding: “Manchester United in periods of no success is a great, great story and you will read so many things.

“People behind the scenes saying this is coming out of the dressing room, there’s division, all of this we know has happened time and time again.

“And the thing is, once you’re inside the training ground, Old Trafford, you stay close, you never tell anybody anything. So these stories, they’re literally just taken out of thin air.

“And it was important – really, really important – that the team came out yesterday, in the most difficult of circumstances, and showed the world that they are United, and they play as a team.

“They’ve still got, in terms of football, so many more things to prove.”