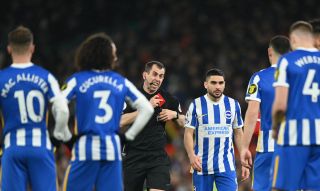 Manchester United have been fined £20,000 for a breach of FA rule E20.1 that took place against Brighton.

The Reds won the match 2-0 thanks to goals from Cristiano Ronaldo, who ended a six-match goal brought, and Bruno Fernandes to get back to winning ways in the Premier League before going on to beat Leeds United 4-2 at Elland Road.

With the players set to fly out to Madrid for tomorrow night’s Champions League last-16 clash, news has emerged that United have been hit with a £20,000 fine after failing to ensure their players conducted themselves in an orderly fashion against the Seagulls.

That was upgraded to a red after VAR intervention, so the United players had every right to be angry with Bankes’ first call. Now the club has been fined for an error that had been corrected.

A statement from the FA Spokesperson Twitter account confirmed: “Manchester United FC has been fined £20,000 for a breach of FA rule E20.1 that took place at its Premier League game against Brighton & Hove Albion FC on Tuesday 15 February 2022.

“Manchester United FC admitted failing to ensure its players conducted themselves in an orderly fashion during the 53rd minute and accepted the standard penalty.”

Bruno Fernandes was also booked for his reaction during the prote