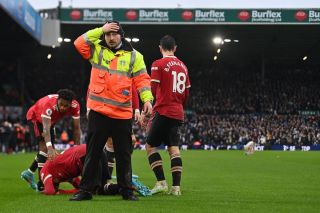 Leeds will issue lifetime bans to any supporters found to have thrown objects onto the pitch during their defeat to Manchester United, even though missiles were also thrown towards the away end on Sunday.

Anthony Elanga was struck on the head by a coin as he celebrated United’s third goal to make it 3-2. The 19-year-old went on to make it 4-2 and made a relegation gesture towards the home support at Elland Road at full-time.

The relegation contenders have acted and plan to throw the book at any fans shown to have thrown objects onto the pitch.

“Leeds United are reviewing CCTV footage and we will do everything possible to find those supporters who are throwing objects onto the field of play,” a Leeds spokesperson said, as per The Times.

“Any supporter caught throwing objects onto the pitch will be issued a lifetime ban from attending our fixtures.”

It goes without saying that this sort of behaviour has no place at football.

There is nothing wrong with hatred in football, but throwing coins and other objects at players and other fans is something they need to stamp out by prosecuting those at fault.

On top of that, West Yorkshire Police confirmed a number of arrests had been made before and during the match.

“Police resources were deployed throughout Leeds city centre and outside the grounds before, during and following the match to ensure the safety of fans travelling to and from the game with minimal inconvenience to the general public.

“There were no reported injuries to any players or fans on either side.”