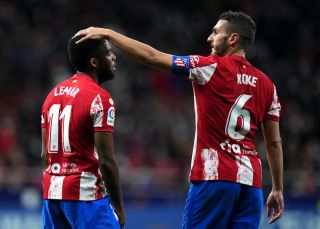 Diego Simeone’s side got back to winning ways in La Liga last weekend, with a 3-0 win at Osasuna, but the Argentine has some injury issues ahead of the big match.

Atleti are already without Felipe Monteiro and Yannick Carrasco due to suspension, but now skipper Koke can be added to the list after sitting out training on Monday morning due to a muscle issue, as per Marca.

Koke’s absence comes as a blow for Atleti, who will be delighted to have central defender Jose Gimenez fit after the Uruguayan was taken off at half-time versus Osasuna.

“Our player Koke finished the game against Osasuna with discomfort,” an Atletico statement on Tuesday read.

“The midfielder has undergone medical tests in the last few days, the results of which have shown that he is suffering from a thigh muscle injury.”

Koke has been a regular in Simeone’s side and has not missed a European game for Atleti since November 2018.

It will be interesting to see if we can win the midfield battle with Atletico missing Koke for the first leg at least.