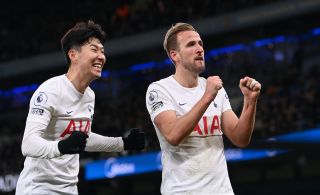 Harry Kane could be Manchester United bound, especially if his former manager Mauricio Pochettino joins the club this summer.

According to ESPN, the transfer is a possibility, but dealing with Tottenham is never easy and they would demand around £100m million for his signature. On top of that, Kane would ask for around £350,000-per-week in wages.

The England striker has been heavily linked with a move away from Tottenham, as Man City upped their efforts to sign him last summer, but it’s never easy to conduct business with Daniel Levy when last summer he demanded an extortionate fee for the goalscorer.

But with another year down, Kane is closing in on his contract expiry (2024) so it might be a good time for United to show an interest in the player.

Kane was terrific during Tottenham’s 3-2 win over City on Saturday, scoring twice against the side that did their utmost to sign him before the 2021/22 season began.

The England captain has five goals in his last six games.