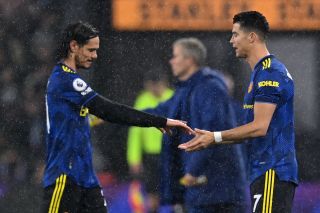 Ralf Rangnick says Manchester United will be without Edinson Cavani for the last-16 first leg clash with Atletico Madrid.

The interim boss was asked about injuries at his press conference this afternoon.

He said (as quoted by the Manchester Evening News): “No, Edi will not make the trip, he did not train and he has not been training for the last couple of weeks, he will not be part of the group.

“He has problems with his groin. As long he doesn’t feel able to fully sprint it doesn’t make sense to push him.

“I think he’s got enough experience to know if he’s ready to play again.”

So, another game without Cavani, even though it’s unlikely that he would have started.

Everyone wants to talk about why United didn’t need to sign Cristiano Ronaldo, but they’re forgetting how much football Cavani has missed this season.

Rangnick also expressed his belief that Atleti have an advantage going into the game, saying: “Of course we had a game on Sunday, a very physical one. Atletico played away at Osasuna on Saturday so there might be a slight advantage with regard to recovery on their side.

“We obviously made sure the players can recover in the last two days and maybe we’ll have some fresh legs on the pitch, we’ll see tomorrow.

“Obviously we have to prepare for an emotional if not hostile atmosphere in that stadium.

“For tomorrow it’s about getting the best possible result.

“We should not be too much interested in what happened in the last five, six, seven, eight years.

“The future and normal life is in the present tense and maybe in the next couple of days and weeks.

“We have the chance to proceed into the quarter finals of the Champions League but to do that we have to show that we’re up for that.”

The Champions League is our final chance to win silverware this season. As unlikely that sounds at this point of the season, pundits said the same about Chelsea last year and they went all the way.

United should be looking to come away from Madrid with one foot in the quarter-finals.