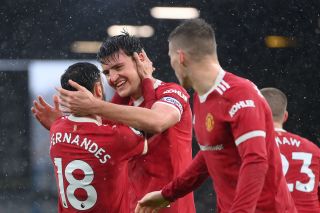 Bruno Fernandes gave us some insight into Manchester United’s dressing room this afternoon, after constant speculation about playing falling out and becoming irritated by one another.

These claims have already been shot down by some first team members – including Marcus Rashford and Harry Maguire – but we know that winning matches is the only way to keep the press quiet.

Maybe there is confidence growing in the dressing room, with players becoming vocal about bogus claims that come from the daily newspapers, but Fernandes says the mood in the camp is high and that was obvious during the win over Leeds on Saturday.

The Portuguese Magnificio referenced Maguire’s goal as United scored their first goal from a corner this season.

“The goal of ‘H’ [Maguire], Paul’s [Pogba] sliding behind him on his knees, I was slapping his head saying finally he scored with his big head,” Fernandes said laughing, as per Manchester Evening News.

“I think the team has been playing well even in the games we didn’t win. Obviously when you don’t get the result, it’s not perfect.

“Winning games, you feel more confident. Going into this game, which is an important one, obviously we know that having that confidence of winning games gives you something more to be prepared for the game.

“If we stick from the plan from the first to last minute, we can win the game.”

Fernandes, who was sat alongside Rangnick, clearly believes in his new coach. The Reds have played in a number of different formations under the German, but he looks set on 4-3-3 with Fernandes and Paul Pogba in advanced midfield roles.

We are not sure Maguire will appreciate Fernandes referring to his big head, but the Portuguese star didn’t mean anything bad with his comments.