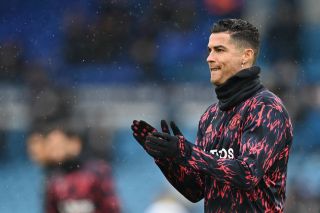 Atletico Madrid star Angel Correa has spoken to the media before Manchester United arrive at the Wanda Metropolitano tomorrow evening in the Champions League round-of-16.

Neither side are in good form at the moment, so it makes for a difficult game to call, even though you know we’ll have our red specs on before kick-off.

The La Liga champions are currently fifth in the league table and it would almost be an impossible task to defend the title at this point – trailing league leaders Real Madrid by 15 points. That means their focus is on winning the Champions League.

United, on the other hand, are in a similar position – gone from hoping to win the title to competing for a top four finish – but our form in Europe this season has been impressive.

The presence of Cristiano Ronaldo is a big talking point in the Madrid based newspapers because of his outstanding record against Atlet – scoring 25 times against them down the years.

“We know how Cristiano is,” Correa said ahead of the match in an interview with Marca.

“He’s already done a lot of damage to us in previous times that we faced each other. But you can’t look at Cristiano; you have to look at the entire team. They’re a great side and we’re going to have to make a serious effort to beat them.”

Correa is expected to lead the line for Atleti on Wednesday night.