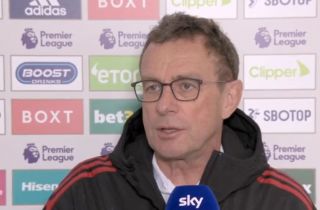 Manchester United are currently preparing for a tense battle against rivals Leeds United.

However, playing in front of a packed Elland Road crowd for the first time in 18-years, the Red Devils, led by interim boss Ralf Rangnick, will know that anything less than their best will not be good enough.

Naming a strong starting 11, Rangnick has shocked fans are including midfielder Jesse Lingard as part of his side to face Marcelo Bielsa’s Whites.

Explaining his decision to start the previously out-of-favour and soon-to-be free agent midfielder, Rangnick, who spoke to Sky Sports, said: “He looked sharp in training.

“He’s got a lot of experience, he is a player who can cover a lot of the pitch and score goals and that’s why I decided to go with him and play him today from the start.”

🗣 “He looked sharp in training.”