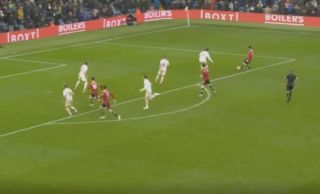 The Red Devils would have known that a packed crowd at Elland Road would have made Sunday’s game intense, but that hasn’t stopped them from putting on a fine performance.

Victor Lindelof and Jadon Sancho combined expertly down the right side of the pitch, allowing Fernandes to get inside Leeds United’s box before nodding home a simple ball past goalkeeper Illan Meslier.

The midfielder heads the ball down and past Meslier from Jadon Sancho’s cross! pic.twitter.com/kqX3UdGrVN