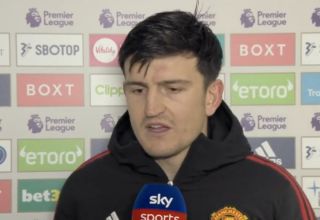 After travelling to Elland Road and beating Leeds United 4-2 in the Premier League on Sunday afternoon, Manchester United remain in the race for top four.

The Red Devils, led by interim German manager Ralf Rangnick, would have known that a win was vital on Sunday but after going up against Leeds United, in front of a jam-packed Elland Road for the first time in 18-years, the atmosphere, as well as the playing conditions, were far from ideal.

Despite the magnitude of the tie and the fact the Whites made it 2-2 early in the second half, it was United who came away victorious after two late strikes from Fred and Anthony Elanga sealed the tie 4-2.

Speaking after the game, United captain Harry Maguire, who scored the match’s first goal, said: “The conditions in the second half were really bad, to be honest.

“The half that we were playing in and defending was really waterlogged so we come out at the start of the second half and tried to play how we played in the first half – dribbling and trying to take the one-on-one battles.

“We knew straight away – we got caught on it too much, especially in the first five minutes of the second half so we had to get used to the conditions.

“But yes, it was old school – I think there were so many tackles, I am sure it was good to watch a game like that, but thankfully we came out on top.”

🗣 “The half we were playing in and defending was really waterlogged.”

Harry Maguire on the rainy conditions that Manchester United were playing in at Elland Road pic.twitter.com/1EMGwW49gf