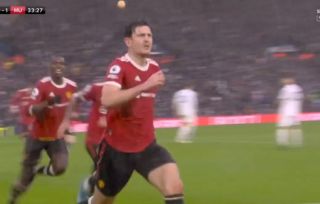 Harry Maguire has opened the scoring at Elland Road, where it stands 1-0 in Manchester United’s favour.

The Yorkshire-born, Sheffield United-bred Manchester United captain has got a ton of abuse from the home fans today, but he silenced them with a first half goal.

It was also the first time United have scored from a corner this season – with Maguire getting on the end of it to score against our old rivals – but Ralf Rangnick has hinted in recent weeks that a goal was coming from a set-piece.

There isn’t a better way to silence the Elland Road crowd than with a towering header.

The Manchester United captain gets on the end of Luke Shaw's corner to nod the away side into the lead! pic.twitter.com/4fxDOJ6MqY

You can see our corner stats in the video above, just before Bruno Fernandes’ corner kick, and it showed United ranked 20th in the league.