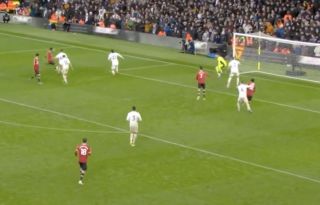 After being introduced with a little under 30-minutes to go in Sunday’s Premier League game against rivals Leeds United, Manchester United midfielder Fred has fired his side into a 3-2 lead.

Despite storming to a 2-0 lead during the game’s first half, the Red Devils were pegged back within the space of 24-seconds thanks to two quick-fire goals from Rodrigo and Raphinha.

However, seemingly determined to regain his side’s lead, interim manager Ralf Rangnick opted to switch things up in the middle of the park and introduce Fred in place of Paul Pogba – a decision, which at the time, was seen as questionable.

Despite many fans questioning Rangnick’s substitution, Fred repaid his boss’ faith just minutes after coming on by popping up with a goal that could prove to be the winner.

This game continues to deliver! 😮

Manchester United retake the lead and it’s Fred, just minutes after coming on, who SMASHES the ball into the back of the net to make it 3-2! pic.twitter.com/VB1I2kV1p7