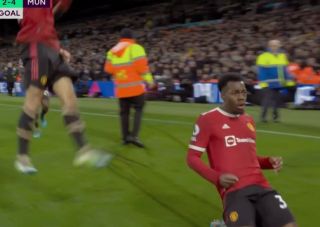 Bruno Fernandes pulled off a wonderful piece of skill, but Anthony Elanga did the rest to make it 4-2 at Elland Road.

The Portuguese midfielder flicked the ball over a Leeds United defender before playing in Elanga to make it four. He sold the defender with a piece of magic.

Moreover, it was the 50th goal Leeds have conceded in the Premier League, which doesn’t come as a surprise because they have been awful defensively whenever we’ve played them.

Elanga does well to finish after missing his chance early on.

Shortly after scoring his goal, Elanga was hacked down in the Leeds half and the handbags came out, forcing Rangnick onto the pitch to calm things down.