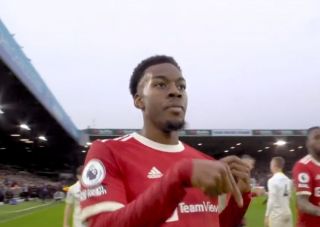 Manchester United youngster Anthony Elanga was hit in the head by an object thrown from the stands during our Premier League clash with rivals Leeds.

According to the Daily Mail, the object thrown at Elanga was a coin, and it came from the South Stand after he celebrated Fred’s goal in the 70th minute.

Elanga was floored after the incident and had to receive medical attention on the pitch just three minutes after coming on as a substitute.

The medical team felt he could continue, and the academy graduate went on to score United’s fourth goal after a piece of magic from Bruno Fernandes.

However, Elanga had the last laugh at Elland Road at the full-time whistle when he made a gesture towards the South Stand, pointing downwards which is an obvious dig at Leeds being in a relegation dogfight.

That should shut them up!

Hopefully the fan who threw the coin is identified and dealt with appropriately.