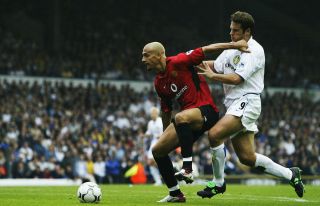 Manchester United take on Leeds at Elland Road this afternoon in the Premier League and there’s a strong possibility it could get nasty.

The two sides have a strong feeling of hatred for one another and Rio Ferdinand knows all about that after making the switch from Elland Road to Old Trafford in 2002.

Ferdinand has revealed that he needed police protection due to the nature of hatred towards him following the transfer. In an Instagram post, the retired defender describes what it was like to play against Leeds, the transfer and how his relationship with their fans healed overtime.

He wrote: “Elland road will be absolutely bouncing today. Man Utd are in town and there isn’t a game that gets the Leeds fans frothing at the mouth like this! I actually didn’t realise how big the rivalry was until I actually signed for @manchesterunited. A day or two after I had signed for Man utd I got a call from the Yorkshire police advising me not to come back to Leeds for a while as they had some intel that it would be quite dangerous for me!

“I quickly realised how big this was for Leeds fans and I especially did when I played my 1st game back at Elland road as a Man utd player. I had a police escort From the team bus to the changing room when we got to the stadium and then when I got out onto the pitch the fans that once loved me for the time I was there made their feelings known in no uncertain terms!

“The atmosphere was electric towards me and my teammates – absolute dislike (to put it mildly). As a player I loved these days, the more the opposition fans were against you the more it fired you up! Unfortunately we lost 1-0 that day but it was an atmosphere that stayed with me for a long time after!

“The players today need to be ready for Elland road because the fans have waited a long time for this & they will wanting the utd players to feel the full force of their feelings towards them!

“PS I have a decent relationship now with most @leedsunited fans when I see them and enjoy a bit of banter with them here and there. I think deep down they now understand why I left and went to Man utd – financially Leeds HAD to sell me & I I chose Man utd to WIN trophies. Job done!”

It goes without saying that this clash is also huge for United’s bid to finish in the top four, so there’s more to the fixture than it being an old rivalry. The Reds will want to capitalise on the fact West Ham dropped more points this weekend.

Leeds, on the hand, could slip into a relegation scrap ahead of games against Liverpool and Tottenham next week.

It would be marvellous to see Leeds go down and all the better if we can contribute to that.