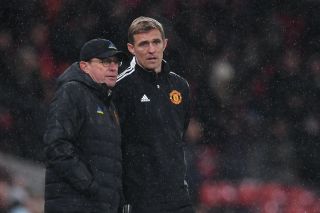 Fletcher, 38, was appointed technical director in March 2021 – on the same day John Murtough was promoted to football director. The Scot had returned to United that January as part of Ole Gunnar Solskjaer’s coaching set-up.

When Fletcher got his new role, it was said that he would focus on “a co-ordinated and long-term approach to player and squad development”, while adding “technical input and direction into all football and performance areas” alongside Murtough (via ESPN).

However, the 38-year-old has sat alongside interim manager Ralf Rangnick in the dugout and also helped run training sessions which makes sense following the departures of coaching duo Michael Carrick and Kieran McKenna.

Speaking to the press ahead of United’s away trip to Leeds, Rangnick spoke about Fletcher.

He said (via Daily Mail): “Well, I can only talk about what I’ve experienced in the last 11 to 12 weeks. He has always been part of almost every training session and each game.

“Whenever I have had a question about what he thinks, because he obviously knows the players, he has known them for a long time. I could always, and will always, ask him for his opinion. So it is good to have him in the team.

Fletcher is set to play an important part in United’s managerial search but it remains to be seen whether Rangnick will have any input on that since he will move upstairs into a consultancy role at the end of the season. Hopefully he will have a greater understanding of Fletcher’s role then.

Moreover, United must also keep their eye on the transfer market. The club could lose several players, including Paul Pogba, on a free in the summer and Fletcher is set to be busy.

Our focus today won’t be on managers or transfers, though. It’s about getting three points at Leeds.