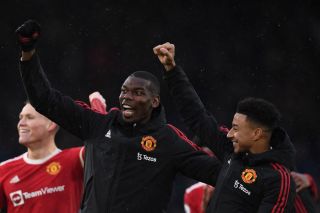 United had lost only 1 of their previous 16 Premier League games against Leeds: A 1-0 Elland Road defeat in September 2002.

Following on from an opening day 5-1 victory at Old Trafford, United were looking to complete their first league double over Leeds since the 1999-00 campaign.

Only Norwich had conceded more goals than the home side this season, and United have managed clean sheets in their two previous away League games against Leeds. As well as this, the home side had lost two of their last three Premier League home games.

An extremely important three points were on offer, and if United had serious hopes for a top-four spot, this was a must-win game.

As expected, Leeds burst out of the blocks and the partisan crowd were in a raucous voice. The forever loyal travelling contingent was equal, and both sets of supporters set the tone for what was to come.

Leeds had the best of the early play, and the first real opportunity fell to the impressive Harrison. A swift counter-attack supplying an opportunity which he volleyed over the bar.

The following 10-15 minutes was largely scrappy, with the continued rainfall making it difficult for players to impose themselves. In what was a stop/start affair, each set of players were leaving their mark on individual challenges.

After 20 minutes, Leeds forced De Gea into his first real save, with the Spaniard pushing Forshaw’s attempt to safety. United then began to grow into the game and Paul Pogba was assuming control over matters.

With 25 minutes on the clock, Pogba did brilliantly to skip past Forshaw on the wing, enter the box and expertly pass the ball to the oncoming Cristiano Ronaldo. Again, with the difficult conditions, the ball landed slightly behind the Portuguese, and his effort fell into the arms of the relieved Meslier.

35 minutes on the clock and United finally banished those set-piece blues! Luke Shaw whipped a lovely corner in from the right and Harry Maguire Powered past Llorente to head into the back of the net. The captain, clearly delighted, rushed to celebrate with the away support. 1-0 United!

United doubled the lead on the stroke of half-time with a brilliant team goal. Victor Lindelof carried the ball from deep, supplied the pass to the impressive Jadon Sancho, and his cross was headed home by Bruno Fernandes. The perfect end to the half for the away side.

Leeds introduced the impressive Raphinha at half-time, in hopes that he could help spark a revival. However, it was United who started the half the stronger. The weather was getting worse, and the wind and rain were affecting control of certain passages.

With that, an attempted Rodrigo cross inadvertently found its way over De Gea and into the back of the net. A freak goal but one that the home support was desperate for. Elland Road exploded and United needed to control the next few minutes.

Instead, Leeds would find a second goal in a minute and the game was level. Almost immediately from kick-off, Leeds found themselves in United’s box once more, and Dan James provided the cross to the oncoming Raphina, who gladly slotted into an empty net. Luke Shaw allowed the Brazilian to sneak in behind him. A poor goal to concede.

The game returned to a scrappy affair for the next 10 minutes, as United forced matters in an attempt to regain control. The away side introduced Fred and Anthony Elanga in the 67th minute and couldn’t have asked for a better response.

Within 2 minutes, the Brazilian picked the ball up in the Leeds half, drove at the defence, supplied the ball to Sancho, who expertly held until returning to Fred on his left, allowing the Brazilian to hammer the ball home. A tremendous goal and the perfect response to the manager’s tactical decision.

United should have been two clear within 90 seconds, but Elanga could only find the keeper from his one on one opportunity. Again, Sancho was brilliant in his setup play.

United controlled the majority of the remaining phases and restricted Leeds to efforts from distance. The frustration was building from the home side and challenges were becoming slightly reckless – to be expected in this affair!

United sealed the three points in the 88th minute. The hosts lost the ball in their own half, and Fernandes found his way behind the defence with an exquisite flick. He then slid the ball to Elanga, who got the goal that was previously left in the hands of Meslier.

Manchester United come out on top in a thrilling game and complete their first domestic double over leads since 1999-00. Many positives to be taken from a tricky game, and United have followed up their Brighton victory with 3 more points. Morale is building on the road to Madrid.

– United have finally scored from a set-piece. In what had become a weekly joke, we were wondering if we’d ever see a return again. The captain had this to say after the game: “Every time I see that stat I’m embarrassed myself. I’m a huge part of that set-piece routine and it’s just not good enough. We need to do better”. A certain podcast did predict this, however.

– Jadon Sancho continued his impressive form. He’s very good, isn’t he? He’s a player that finally looks at home in red and was brilliant again today. 2 assists and should have had more. He’s brilliant on either wing and key to this United project.

– Fred cameo. What a 25 minutes that was! Fred was everywhere and involved in nearly everything. His passing was massively improved from Brighton and his goal was tremendous. I’m delighted for him.

– League double completed over dirty Leeds. As I’d stated above, this is the first double since 1999-00, and we’ve done so with 9 goals across both. If you’re a red and you can’t enjoy that, this game might not be for you.

– 4 point lead in top four. Unbeaten in 7 and 4 points clear of 5th spot. Other teams may have games in hand, but we’ve got the points on the table. Who said 4th place is gone? Massive momentum as we enter a difficult March.