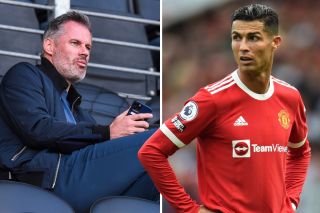 Manchester United have been urged to sell Cristiano Ronaldo.

While we are not suggesting that the club will listen to what Jamie Carragher has to say about such matters, his latest column for The Telegraph makes for interesting reading – whether you agree or disagree with his opinion.

I don’t think Ronaldo is necessarily a problem as he scored enough goals to ensure United stay in the Champions League.

Can you imagine how bad our season would have been with just Edinson Cavani up front when he’s rarely available to play?

Carragher claims that it was a mistake by United to re-sign Ronaldo last summer. He thinks that we are a much stronger outfit without him.

The Sky Sports pundit wrote: “United made a mistake re-signing Ronaldo last summer. It will be a bigger one keeping him next season. United scored 121 in all competitions in 2020-21, their highest tally for 14 years. That is because they were a more balanced, unified team than now.”

Ronaldo has scored 15 goals in all competitions since his move from Juventus, but he recently ended a 6-game goal drought which has everyone talking in attempt to knock the 37-year-old.

Let us know what you think of Carragher’s comments.