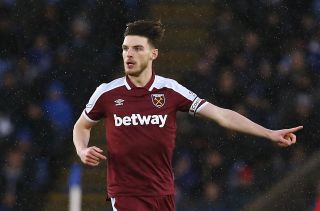 West Ham ace Declan Rice is ‘keen’ on a move to Manchester United, but the Reds are unlikely to meet the reported £100m asking price.

It is set to be a busy summer for Declan Rice, who has attracted significant interest from not only Manchester United but Chelsea (via The Telegraph), though we should note that he is currently West Ham’s most prized asset.

Rice will have two years left on his current deal at the end of the season and the Hammers could decide now is the best time to maximise profit on the player.

However, Manchester Evening News reporter Samuel Luckhurst has provided an update on Rice during a Q&A with MEN readers.

Luckhurst wrote: “I doubt any club would spend £100m on Rice but there would be interested clubs next year if he doesn’t go this year when his resale value would have dwindled,” he said.

“The point on whether United should spend separately on two midfielders is a valid one, but it depends on how good their scouting is. United want Rice and Rice is keen on United, so he’s high up the list already and been of interest to them for three years or so.”

Matt Law from The Telegraph recently stated that he doesn’t think Rice will cost £100m this summer, with West Ham’s owners looking to cash in on the England international before they sell up.

“Thomas Tuchel would love to have Declan Rice on his team.” – @Matt_Law_DT pic.twitter.com/7GcynxGmXk

The journalist also gave a timeframe for David Sullivan and David Gold to leave the club – suggesting that there could be movement on that front in 2023.

The Hammers will find it difficult to keep Rice unless they qualify for the Champions League.