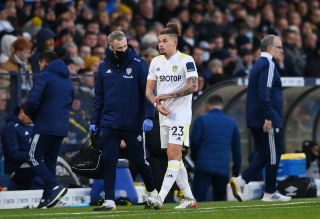 Thankfully Manchester United don’t have many absentees to worry about for the trip to Elland Road. While Edinson Cavani is expected to be unavailable for the clash, Raphael Varane will return after recovering from an illness.

Our opponents Leeds are not so fortunate on the injury front, though, and they’re missing some key players for the match.

Leeds star Kalvin Phillips is out and won’t be expected back until March, Marcelo Bielsa told the Yorkshire Evening Post, and it’s an obvious boost for the Reds that they will be without their best midfielder.

Liam Cooper has also been ruled out with injury.

“Kalvin and Cooper continue their normal processes, the objective is that they get to March available,” Bielsa told reporters.

It could be a long month for Leeds and defeat on Sunday could drag them into a relegation fight. Then, next week, Bielsa needs to try to get something from their games against Liverpool and Tottenham Hotspur which won’t be easy.

On top of that, Leeds United will also be without Patrick Bamford, who has not been available for the side since December.

I suspect that, with or without these players, Leeds will be up for the big occasion. They will be treating this as their biggest game in years, hungry to provide an upset and to get three points on the board.