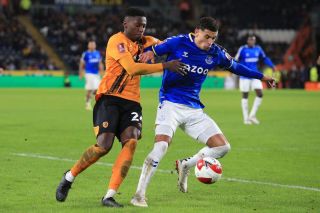 Manchester United youngster Di’Shon Bernard is impressing on loan at Hull City and manager Shota Arveladze has confirmed plans to buy the defender at the end of the season.

Bernard started at right-back in Hull City’s 3pm kick-off against QPR, with the Championship side currently 19th in the standings, and winning 1-0 thanks to a Marcus Forss opener 26 minutes in.

Arveladze has told Hull Live that he wants to sign Bernard and keep him at the club beyond his loan spell.

He suggests that the United youngster is open to the idea of staying at Hull City and talks are already underway. A decision, however, has yet to come from the Reds.

“It’s a great chance for them to play regularly, and probably they realise this. I’ve spoken with (him) and (he is) open, so let’s see. “I don’t know exactly if we have spoken to (Manchester United).

“We will talk to each other, a process we’ve already started. We’ll talk with (the) agents, today (Thursday) I’ve spoken with Dish (Bernard). We are busy, the club is working hard. I’ve already spoken to the players and they see their future at this club, which is good to know.

“The process is ongoing and I think we have time, not too much, but time to sit and make the right decisions which is not easy, of course.”

With Axel Tuanzebe currently on loan at Napoli and unlikely to get a chance at United next season, Bernard could be even further down the pecking order as Ethan Laird and Teden Mengi are both set to return from their loan spells in the Championship.

Bernard needs to put his football first and it sounds like he might just do that by staying at Hull City.