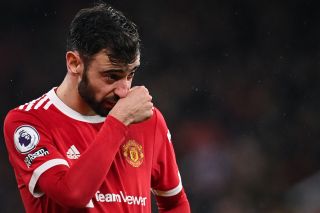 Bruno Fernandes and Juan Mata are best friends according to the Portugal international, as the midfielder detailed their relationship and more during a Q&A with Manchester United’s in-house media.

Manchester United star Bruno Fernandes has revealed his bromance with ‘best friend’ and veteran Juan Mata and has explained how he has learned so much from working with the Spaniard.

The Portugal international was signed from Sporting Lisbon in January 2020 and instantly became a star player under Ole Gunnar Solskjaer. He has since become a favourite around the United camp, especially with Mata.

With questions including his best goal, who is the greatest footballer of all-time and Fernandes’ favourite food we gained an insight into the Portuguese Magnificio.

There will soon be talk about Fernandes’ contract and we hope he puts pen to paper when offered a new deal, but at least he appears to be loving life at the club, so I guess it helps having Mata around.

When asked who is his best friend at the club, Fernandes said (via ManUtd.com): “So that’s a hard one because I have a good relationship with everyone, honestly, but I think I would probably choose Juan [Mata] because I learn a lot from him in this two years. He’s been someone who’s been really special and make me better every day, on and off the pitch. He made me grow up to be a better player and a better person also.”

Fernandes also said that Cristiano Ronaldo is the greatest player of all-time, while describing his favourite Portuguese sandwich.