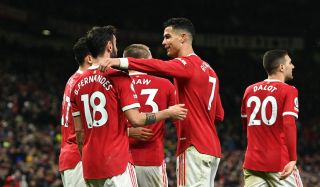 Manchester United manager Ralf Rangnick had a lot to deal with at his press conference this afternoon.

Two damning reports made their way into the mainstream media during the week suggesting that rifts had developed in the dressing room, with Cristiano Ronaldo being the common name mentioned.

First, we had Marcus Rashford dismiss Christian Falk’s report – a move that was praised by a fellow reporter, who told Sky Sports about how this false information is unfair for fans as well as the players involved.

Rangnick insists the atmosphere in the dressing room has improved since the January transfer window closed. He conceded some players were unhappy at the lack of game time while Anthony Martial, Amad and Donny van de Beek all left on loan.

The former Red Bull mastermind also dismissed reports about rifts within the dressing room as “absolutely nonsense” during his exchange with reporters.

Although Jesse Lingard and Dean Henderson wanted to leave on loan, United denied moves and both players remain part of the squad.

The manager was asked whether he was frustrated by the constant narrative surrounding United.

Rangnick said (via Manchester Evening News): “Well I’m not frustrated at all because I know it’s not true. I told you about Harry being the captain, it’s not an issue at all, it’s never been an issue for us or myself as manager.

“All the other things, to be honest, I don’t listen to that noise that much because my full focus is on preparing the team for the next training, for the next game.

“Obviously, I have heard about what was written. I can only tell you from my personal experience in the last 12 weeks, yes, there were players unhappy until the closure of the window because, as I always said, the squad was too big, we had too many players who just realised they wouldn’t get game-time and this has improved, for sure.

“From what I can tell, the atmosphere in the locker room is better than it used to be a couple of weeks ago for all those reasons I just spoke about.

“As you quite rightly said, for us it’s about performing well, showing togetherness on the pitch, getting the best out of our performance and winning games, that’s our job. Those are the things we can influence, all the other things we can’t.”