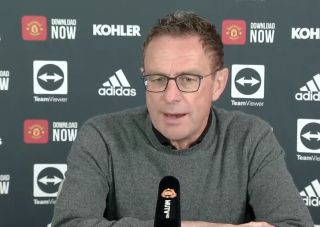 Ralf Rangnick described recent reports about a change of captain at Manchester United as “nonsense” to finally put the claims to bed.

The German had already said that Harry Maguire would remain as captain until the end of the season at a recent press conference, but we needed further confirmation after speculation intensified over a rift in the dressing room.

According to The Mirror on Thursday, Rangnick faced another issue among his players after a power struggle developed between Maguire and Cristiano Ronaldo over who should lead the team as club captain.

However, Rangnick says these reports are absolutely nonsense – with not a single bit of truth in them.

“This is absolutely nonsense,” Rangnick told reporters. “Harry Maguire is our captain and he will stay our captain until the end of the season.”

🗣 "This is absolutely nonsense. Harry Maguire is our captain and he will stay our captain until the end of the season."

I’ve seen a lot of reports about this club that aren’t true and this is another. Not going to start posting about everything that is written but I needed to make this one clear. We’re united and focused on Sunday. Enjoy your day everyone 💪🏻 @ManUtd https://t.co/YxLhQn8pqf

Marcus Rashford led the way for United players to silence lazy journalism midweek, when he did the same after Christian Falk was guilty of spreading similar rumours about unrest among the players following Ronaldo’s return to the club.

Hopefully this will put a stop to all the captaincy talk for another 5 months at least.